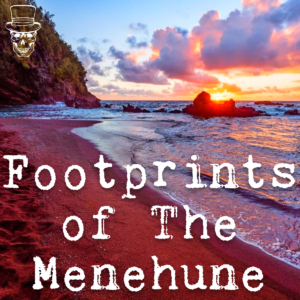 An ancient race of people, who built sacred structures, may still live among us playing mischievous tricks and cursing construction projects on sacred land they guard fiercely. Wait. Are we talking about fairies in Ireland? Elves in Iceland? Nope. We’re talking about menehunes in Hawaii.

All of these vastly different cultures hold similar beliefs just as many native people of the Americas do as well. The little people in all of these cultures are guardians of nature and must be respected. Some even believe they are ancestors.

Other ancient European traditions have analogs in Hawaii as well. The Wild Hunt of Germanic and Scandinavian lore, for example, features a threatening procession of fairies or the dead that are an eerie echo of the ancestral Hawaiian warriors called the Night Marchers still said to march in special areas. Those unlucky enough to cross their paths in either tradition are in great peril.

Near Lahaina these nocturnal processions of spirits were once seen passing through a boulder field. This historic land was used by Hawaiian priests of the past and there was a trail that ran between ancient stone temples called heiau. It was also whispered that menehune inhabited this area.

In late 1949, Pioneer Mill Company began removing these sacred rocks. The fields were to be cleared to make way for sugar cane. Then where the huge stone cairns rose, weird things began to occur, according to local historical Inez Ashdown.

The work progressed and several of the monuments had been removed when one particular rock resisted the efforts of tractors and men to move it. Local elders called this the Menehune Rock. One of the tractor drivers returned to his work one morning and was amazed to find tiny footprints all about the rock and all over the dust on his tractor. Then the tractor driver tried to move the rock again and had an accident. He refused to try any further. For him, the spirits had made their point.

Other workers claimed to see a sign in the form of akualele, a flying ball of fire traditionally signally transgression. The workers were getting the message that they were not welcome there and should stop their work. One accident occurred after another. Some dismissed the happenings as coincidence. Others like hospital personnel couldn’t help but notice an unusual uptick in such mishaps. Some locals made sacrifices to the spirits to appease them. Many had qualms about fooling around with things we can’t understand. However, there always seem to be workers willing to take their place. Men armed with dynamite took over and the fuses were set. They blew up the Menehune Rock, removing it and the tiny, mysterious footprints with it.

Today the Menehune Rock is no more. Huge piles of stones can still be seen in the hills around Lahaina. They once rose above the newly planted fields of young cane. Many suspected the cane in that area would not survive, but relentless march of progress prevailed. Perhaps the spirits were content with the relocated pile of rocks or perhaps they chose to retreat into the mountains where the cane would not grow and found peace among the forest shade.

All traces of menehune footprints in Lahaina are gone. However, you can still see similar footprints on the eastern side of Maui on the slopes of Haleakala in Kahikinui Forest Reserve embedded in an old lava flow. The most recent of the flows there is hundreds of years old. Just two hundred yards into one of the flows, the strange footprints can be seen. 30 permanently preserved child-sized footprints may be counted within an area of 35 feet. Pointing in every direction, they are visible closely grouped on the smoothest patches of lava.

The prints are very even, a quarter to an eighth of an inch deep, always showing the entire foot. Although it would seem that people trapped in lava would be running, these prints could not have been made by running people, for the pressure would have been greater on the toes, and the toes more deeply impressed than the heel, if the heel was represented at all.

While the lava was flowing, the direction of danger was to the north from whence the flow came, or to the west, where it was wide, but 13 pairs or single prints were headed in that direction. Only a few of the prints seem to be headed toward safety, cold ground which was just 200 yards to the east.

Stories abound. Perhaps these footprints did not belong to ordinary people. Tales tell of menehune, not walking on the hot lava, but carrying heavy stones to the heiau of Loaloa, 13 miles away at Kaupo. According to the story, the stones were so heavy that they caused their little feet to sink into the hard rock. The position of anthropologists is, of course, that these footprints were somehow carved or etched into the lava. However, if you visit, you can see for yourself and make up your own mind as to the most likely explanation.

Many similar dwarf footprints, also supposedly carved into rocks by native people for unknown reasons, can be found throughout the continental United States. This is yet another example of a very specific and unlikely similarity between farflung cultures.