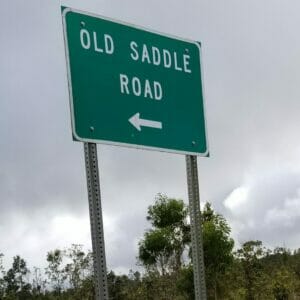 There are many ghost stories from the haunted highways and byways of the Hawaiian Islands. The Pali Highway on Oahu, the Tunnel of Trees on Kauai, and the road to Hana on Maui are some of the most famous. As the biggest of the islands in the archipelago, the island of Hawaii has several hair-raising routes including the notorious Saddle Road. Saddle Road is a long, dark, lonely stretch of highway that straddles the no man’s land between the peaks of Mauna Loa and Mauna Kea, rambling on for over 50 miles. Instead of taking the long way along the coastal roads, those who favor the most direct route between Hilo and Kona, cross into the mysterious interior, the very heart of Hawaii. In the past, this roadway was harrowing for a number of reasons, some practical and some otherworldly.

The first attempts to connect the east and west sides of the island by missionaries were foiled on either side by lava flows, what some consider decisive blows from the volcano goddess Pele. Saddle Road was finally built in 1942 by the U.S. Military. Just a dusty, single-lane track created by connecting ranch trails, it was later widened and paved to accommodate civilian traffic. Back in the day, it was not well-lit and included many steep inclines and drops, blindspots, and hairpin turns. Add to that the spooky legends of paranormal presences inhabiting the wilderness it crosses and you have the makings of quite an adventure. While some may dismiss the chicken skin tales of the Old Saddle Road without exploring for themselves on their own haunted roadtrip, consider these witness reports when planning yours. The following accounts come from people of all walks of life, who experienced terrifying, unexplained events like sightings of ghost lights and other strange occurrences, yet were brave enough to come forward publicly and tell their stories.

The most spectacular flap of ghost stories on Saddle Road occurred in 1955, preceding the first volcanic eruption in the Puna area in 140 years. The witness accounts included a variety of strange phenomena including sightings of ghost lights. The Macomber family of Waiki were the first to come forward. Their harrowing experiences began as they were driving home from visiting relatives in Hilo at about 2 a.m. on January 31st in their old pickup truck. The passenger side door had a tarp stretch across the window, where the glass needed to be replaced. As the family ascended to the area of Saddle Road past the timberline, where fields of bare lava begin, a force abruptly pushed the tarp in on Mrs. Macomber, who was sitting in the passenger seat. She and Mr. Macomber tried to push it out unsuccessfully, fighting against something that felt solid and strong. Then the tapping began. These insistent knocks began on the roof of the cab and proceeded down the hood. As a frustrated Mr. Macomber turned around to head back to Hilo, the mysterious force nearly tipped the truck on its side. That’s when the family of four, Mr. Macomber, Mrs. Macomber, their son Norman, age 12, and their daughter, Daisy, age 10, all saw the strange lights.

Two lights were approaching from about 500 feet away. Could they be headlights? Was there someone else on the road who would stop and help? Although there was no place for a car to turn off, the lights suddenly disappeared. The family drove on and the tapping on the exterior of the truck continued all the way back to Hilo. When the frightened family finally arrived at their relatives’ home, Norman and Mr. Macomber jumped out of the truck, but Mrs. Macomber and Daisy were still trapped inside.

Mr. Macomber struggled to free them with all his strength, but could not, not until he retrieved some Hawaiian salt from his relatives and threw handfuls of it into the truck. This action instantly released Daisy and Mrs. Macomber from the ghostly embrace. Although some people blame these weird occurrences on Pele, Mr. Macomber had a different explanation. When the family finally returned home to Waiki the next day, they learned of other strange happenings from the night before that had occurred in their neighborhood. Based on this new information, Mr. Macomber speculated that this paranormal pestering was most likely due to some clearcutting of trees in the area. He discovered that everyone responsible for the felling of those trees, including himself, reported some sort of unusual and unwelcome visitation that night.

However, perhaps that explanation doesn’t fit, since the paranormal activity on Saddle Road continued.

On February 9th, two carloads of school and county officials, returning to Hilo via Saddle Road, after a meeting in Kona, spotted two yellowish-red ghost lights. This time they weren’t on the road, but instead hovered amongst the brush in the desolate scrubland. They glowed dully until one went out and then the other. Some of these witnesses were named in The Honolulu Advertiser on February 16th, including Ernest B. Silva, Henry Nakata, and Harry Katsura of the DPI, county engineer Yoshio Inaba, and Honolulu architect Ernest Hara.

On February 14th, a taxi driver name Pedro Monzano reported a frightening, but helpful encounter. On the return trip to Hilo, after dropping off his passenger in Humuula, he was forced to stop due to a flat tire. As he jacked up the car in the dark and prepared to change the tire, he dropped the lug wrench on the floor of the trunk. He had just finished placing the spare wheel and was starting the lug nuts with his fingers when he heard something impact the ground next to him. It was the wrench. Some unseen thing had anticipated his next move and tossed the lug wrench on ground beside him. Although he was quite terrified, Mr. Monzano managed to gasp out a “thank you,” before hastily departing without bothering with the hubcap.

On February 15th, vacationers Melvin Summerfield and his wife were bound for Kona in a rented car. They stopped along Saddle Road to take photos. When they got back in the car and released the parking brake, to their astonishment, the car began to roll backward uphill. When they tried again with the same results, the couple decided it would be safer to abandon their plans just drive back to Hilo.

Later in February, hundreds of earthquakes shook Hawaii. On February 28, a mile long crack in the ground opened in Puna and began spitting lava into the sky. Although Saddle Road is not in the vicinity of Puna, many felt the increase in ghostly activity presaged the event. Maybe that’s because the same mysterious fireballs described above also appeared before the eruption in Pahoa along Pohoiki Road in the Puna district. They were seen by Richard Lyman, a county supervisor, and Lily Torii, the wife of Pahoa’s school principal.

Besides being considered predictive of eruptions, fireballs are imbued with many other types of supernatural significance in the Hawaiian archipelago. Referred to as akualele in the Hawaiian language, which translated literally means “flying god,” these fireballs may contain the spirits of deities and are sometimes directed as a curse against enemies.

The island of Molokai is notorious for deadly fireballs. However, all the Hawaiian Islands have such tales. Certain kahunas, who have committed to be priests of the so-called poison god Kalaipahoa, are said to have the power to fashion such frightful spheres of fire. If wronged, priests of Kalaipahoa would hurl one of these spheres into the heavens. Streaking like a flame through the sky, the wooden ball would ignite and fly to the house of the offender.

Kalaipahoa was said to accompany each fireball to its destination, expecting offerings like awa (a ceremonial drink prepared from powdered kava root) and food to be set out for him. Unfortunately, the victim was, of course, not expecting to receive a god at that moment. Finding no suitable offerings or preparations made for his arrival, Kalaipahoa angered and cursed the homeowner with a slow, painful death, often involving terrible stomach pain. On the other hand, if the intended had unexpectedly set out food and awa to avoid such approaching threats, Kalaipahoa would cure him of any illness.

Fireballs are not always munitions of paranormal warfare, but sometimes can convey the spirits of the dead, omens of impending death, or warnings to trespassers. Japanese immigrants to Hawaii call them hitodama. They are often a sign that the spirits of the dead are trying to communicate something to the living. In traditional Japanese folklore, however, a fireball with the face of an old woman is called ubagabi. This is a demon who can curse you with an early death, just by glancing in your direction. The origin story of the first ubagabi is a sad one. She was an old woman who stole oil from the lamps of a holy shrine and committed suicide due to her shame. Dying in similar disgrace can doom one to an afterlife as an ubagabi.

Today people still report strange experiences with mysterious fireballs in Facebook groups like Hawaiian Hauntings. Warnings to stay off Saddle Road after dark persist there. One poster claims, that around the year 2000, she and the other occupants of her white Ford Bronco, two sons, ages 10 and 12, and a nephew, age 10, all saw a fireball fly by them. The witness estimated that it passed as near as 15-20 feet in front of their truck. Just preceding the emergence of this akualele, the engine suddenly shut down and the lights went out. As the fireball flew away from them, thankfully, the truck’s engine came back to life and the headlights switched back on. Clearly, though the physical driving conditions on Saddle Road have improved, its supernatural inhabitants still remain.

For haunted history tours in historic downtown Hilo, please check this out!